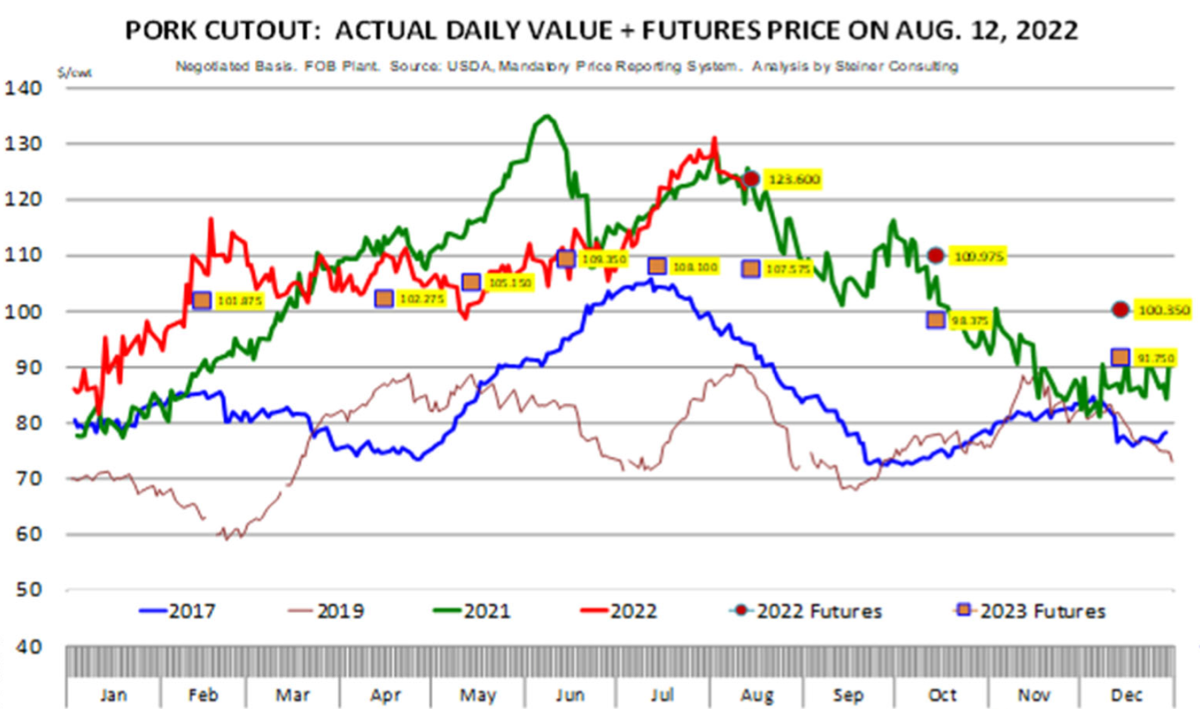 Pork market is hot and cash hog prices are near record levels, but does that warrant current fall premiums?

Hog slaughter last week was pegged at 2.338 million head, only slightly higher than the previous week. This number was about 35k head smaller than what we expected when the week started.

At 2.9% under year ago, this week’s slaughter was well below the levels expected based on the June ‘Hogs and Pigs’ survey.

Does this week’s low slaughter mean the survey was wrong and, if so, should we rethink the supply outlook for the fall as well?

In our view that would be premature. Rather, we think the market has swung from being overly pessimistic in May and June to overly optimistic in July and August.

Producers worked hard to get current in June (see weight chart above). Weekly hog slaughter between the start of June and the second week of July was just 0.5% lower than the previous year.

This number is higher than the survey suggested, implying producers pulled some supply forward. Since then, weekly hog slaughter has been 1.3% lower than the previous year.

For the entire period, however, weekly slaughter has been 0.9% lower than a year ago, not far from the 0.8% decline that the June inventory suggested. This is why we think it is premature to think the hog survey was wrong.

In the near-term packers have had little choice but to pay up in order to get orders filled. They were able to hold their margins together in late July as short-bought processors paid up for hams, bellies and trim.

Retailers also appear to be reluctantly paying up for fresh pork, with loins and ribs getting some support.

The current situation is a bit of a balancing act for packers as they need to fill orders for Labor Day but also recognize that spot hog supply is very current and can only be pushed so much.

That explains, in our mind, why hog slaughter on Saturday came in at just 29k head compared to 78k head for the same week a year ago. Weights of producer-owned hogs have been running well below year-ago levels in recent weeks.

Every year is different, but the current situation bears some resemblance to both 2021 and 2017. During both those years producers managed to get very current in the summer, a function of the supply of pigs born in late winter/early spring and high summer temps.

But what’s always useful to remember is that the supply situation will improve, it is not a matter of if but when. Hog slaughter in the second half of 2021 averaged 2.56 million head/week, 230k head higher than in early August.

Hog supplies in the fall are expected to be about 0.5% to 1% under a year ago. That would put hog slaughter in the second half of September at 2.54 million head. And by late October slaughter will approach 2.6 million head.

Hog carcass weights will increase as well. It will not be +90 degrees in Iowa in September and October and hogs will convert at a more normal pace.

The downside risk for the market is that current high prices will end up rationing out demand just as hog supplies start to pick up. And even as domestic production will be a bit lower than it was last year, supply availability will not change much, indeed it may increase.

Pork imports are so far 40% higher than a year ago and current high US prices have likely meant more purchases of Canadian, Danish, and Brazilian pork.

US pork exports remain under last year’s levels, largely because of China but also because current high prices and the strong US dollar have negatively affected exports to Japan, S. Korea and several smaller markets.

Pork cutout futures are currently pricing the October cutout at near $110/cwt. Last year in mid-October was around $94/cwt.

In order for this 17% increase in the cutout to be justified, we would need to see the ham primal hold above $100/cwt (last year it collapsed to under $70), and the belly primal would need to hold at $180/cwt. These are possible but lofty targets with 2.6m head kills.