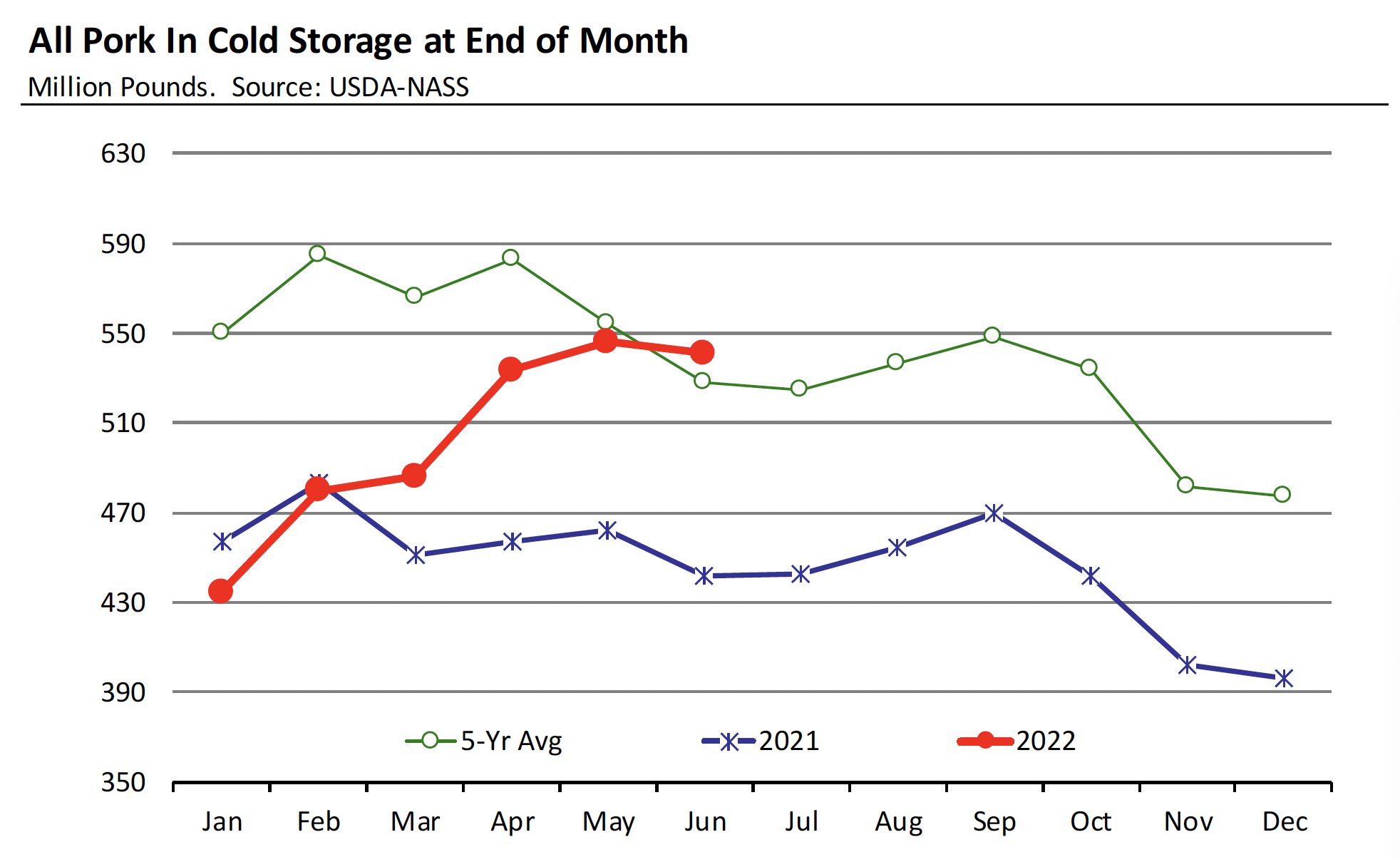 Supplies are in line with the projections from the latest hog inventory data. Market participants seem surprised by the seasonal shortfall. Hog and pork prices are firm in the near term.

It’s that time of year when pork supplies hit annual lows, both due to fewer hogs coming to market and the impact that hot weather has on hog performance. All the issues that normally affect the spot market only get amplified during this time. USDA estimated total pork production last week at 486.5 million pounds. That is about 0.8% higher than a year ago but well below the +500 million pounds a week that was coming to market in May and first half of June. Indeed even that number may be inflated by about 2M pounds as we think the USDA hog carcass weights estimates are about a pound too heavy.

The decline in slaughter and overall production should not be a surprise. We have been talking about that coming since last spring and then reiterated it upon the release of the June 1 hog inventory data. In that report, USDA noted the supply of hogs weighing over +180 pounds, 0.8% lower than the previous year. We estimate that slaughter during the weeks when those hogs came to market was 0.5% lower. We don’t know the split between producer and packer hogs but our guess is that producers managed to get ahead in their marketings during June. This is evident in the sharp decline in the average weight of barrows and gilts during this period (see chart).

In the last three weeks, hog slaughter has averaged 2.277 million head/week, 1.4% less than a year ago. This is lower than the 0.7% decline we would expect based on the June inventory data. Still, if we take the entire period of June and July, weekly slaughter has been about 0.8% lower than last year. This is largely in line with the USDA survey. As we look towards the next 6-8 weeks, it is important to remember that supply will not remain static. Last year, the weekly hog slaughter in the first week of August was 2.327 million head so we would expect this week’s slaughter to be about 16-20k head less than last year. Weekly slaughter in the following three weeks last year climbed over 2.4 million head and this suggests that we will see a notable improvement in supply availability as this month progresses. Watching slaughter and weights will be important. If slaughter remains low, it could be because a) the USDA survey overestimated supply and so far that has not been the case; or b) producers start to fall behind in marketings and this then shows up in the weight of hogs coming to market. Weather will be an important consideration. If hogs are not gaining then producers are not as much under the gun to move their inventory, at least in the very near term.

Pork Inventory in Cold Storage at the End of June Remains Well Above Year Ago Levels but Supply Available Differs Greatly Between the Products Tracked.

Mixed Signals in the Market as Some Items Struggle, Others Trade Firm