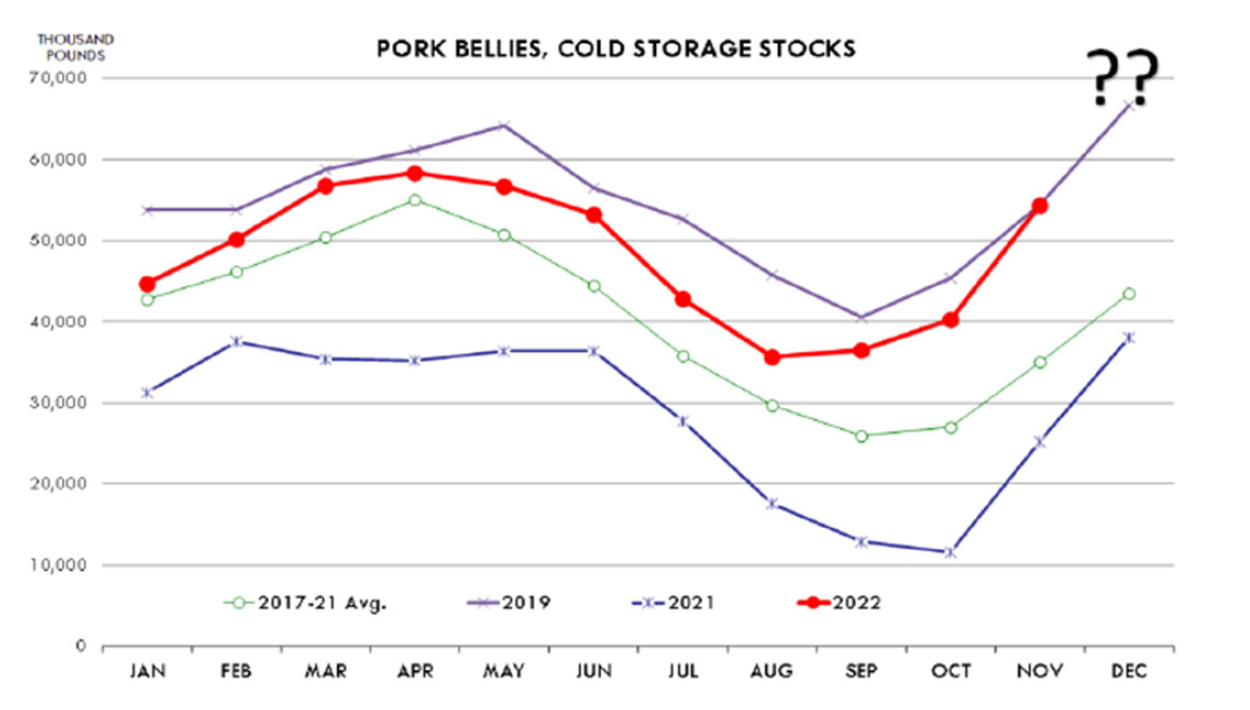 Hog slaughter was near 2.7 million head last week as producers sought to schedule hogs that were backed up due to winter storms and holidays. Slaughter is expected to be lower this coming week, in part because some plants will be dark on Monday for MLK holiday.

The pork cutout started the year on a weak footing, and it has continued to lose ground this week. On Friday the pork cutout was at $81.64, down 5% since the start of the year and very close to the price levels at this time last year. But different from a year ago, when the cutout quickly rebounded in the second half of January, futures markets appear to be more apprehensive. The struggle of the pork cutout to get any traction combined with soft cash hog prices has impacted the front February contract the most. Since December 27 the CME Lean Hog futures contract has lost $12.8/cwt (14%). While holiday trading and thin volume are responsible for the volatility in the second half of December and the weak start in the New Year, the most recent declines seem to reflect real concerns about pork demand, at least in the near term. With that said, the widening spread between February and summer futures suggests that market participants are still believing this is a short term issue.

We think in part the weakness in product markets is a reflection of the disruption in supply due to the winter storms in the Midwest and then the two holiday shortened weeks. Producers were especially current through mid December but then lost significant ground (see chart). The average weight of producer owned barrows and gilts jumped 3.7 pounds from just before Christmas through the end of the year. Weights appear to have peaked. It will take a robust slaughter pace for the next couple of weeks to catch up. Hog slaughter last week was near 2.7 million head but it will be lower this week due to the MLK holiday on Monday. Eventually slaughter should settle at around 2.43 million head/week in February, about 2% lower than a year ago.

Last year the pork cutout traded as high as $110/cwt in the second week of February. While 2023 futures for February were never as high, the expectation was for the cutout to be somewhere in the low 90s. That would then justify hog values in the mid-80s. The biggest surprise so far, and which has likely contributed to the February retreat, is the price for bellies. While a hog carcass produces twice the volume of loins than of bellies, bellies in 2022 contributed more value to the cutout.

According to our calculations the average price of bellies in 2022 was $157.85/cwt, contributing $25.68/cwt to the value of the cutout. The average price of loins was $96.65/cwt, contributing $24.57. The value of the belly primal on Friday was $93.48/cwt, 35% lower than the previous year. There were some 54 million pounds of bellies in the freezer at the end of November. That supply likely grew to 70 million pounds by the end of December. Last time we saw such inventory levels was at the end of December 2019 and the belly cutout the following January and February failed to launch. With slaughter last week near 2.7 million head and plenty of bellies in the freezer, moving them is a struggle.

Current low prices for bellies, hams, and loins as well as the decline in futures presents opportunities to get product covered at attractive prices. The risk for the market is that pork supplies are expected to be down y/y through spring. Lower supply and more orders on the books can cause spot prices to quickly reverse course. Ham prices in our view have more upside risk considering Easter demand will soon come into focus and Mexico demand is expected to be firm.