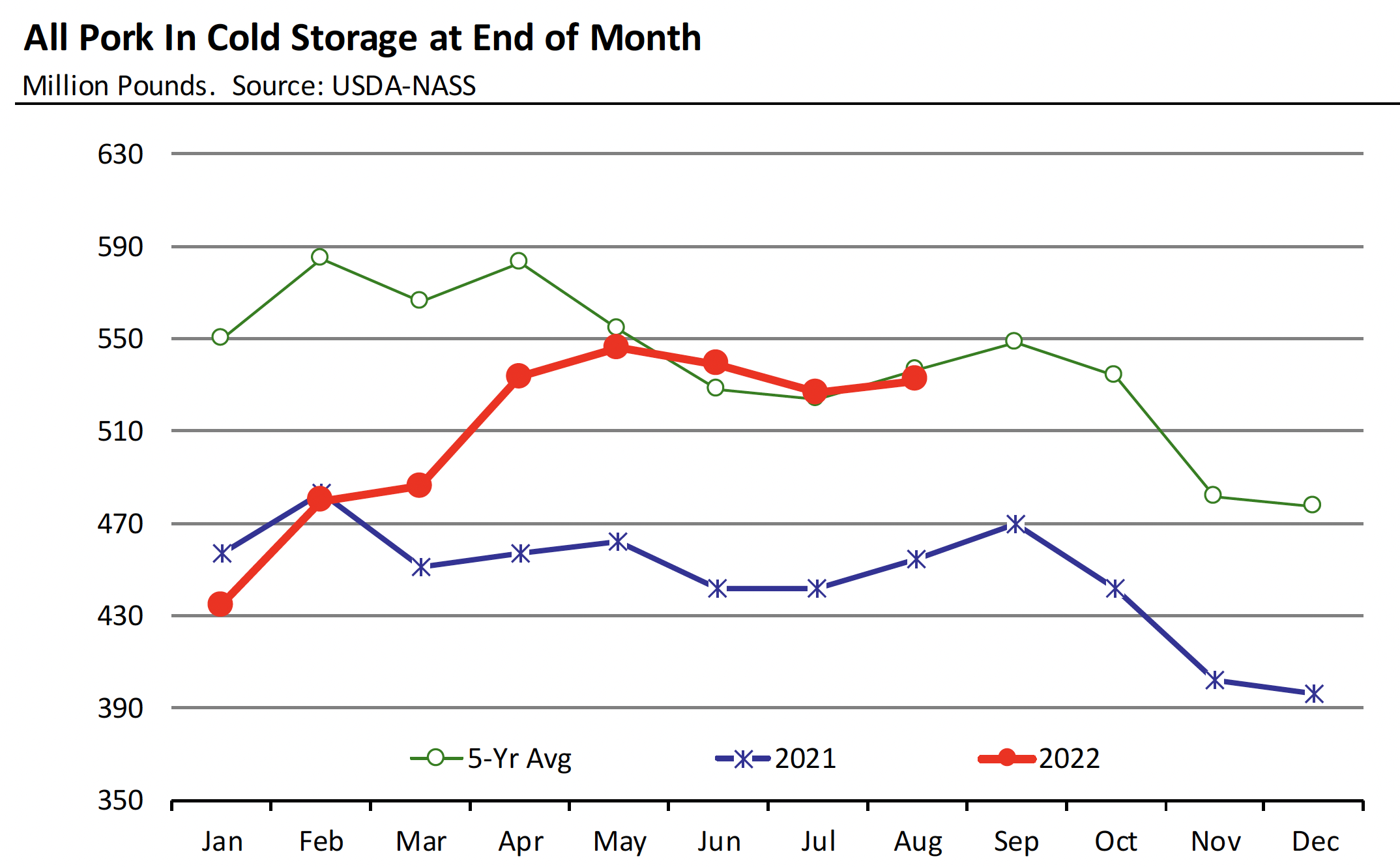 As of June 1, the hog breeding herd was estimated at 6.168 million head, an increase of 70k head from the previous quarter. However, that is still 1.1% lower than the previous year. Weekly sow slaughter during the Mar-May quarter was down by about 50k head although the monthly figures put the decline at 52k. Weekly slaughter for the Jun-Aug period was slightly higher than the previous year which would suggest a modest change in the breeding stock on September 1. However, the slaughter numbers are a very imperfect indicator because gilt retention in a quarter can significantly affect the final inventory number. We don’t have any figures as to gilt retention, either weekly or monthly, and the only way to even come close to an estimate is when the inventory numbers are published by backing into it.

It would be reasonable to expect some relationship between producer margins in each quarter and changes in the breeding herd. The theory is that if a producer is making money then this will encourage an increase in gilt retention. But production decisions are not that simple. Producers have to account not just for the profitability in the near term but also for the outlook in the next 12-18 months. We do not think it is a coincidence that hog futures for 2023 have rallied just as the grain market has moved up. Some of this is probably money flow and inflation bets but it also reflects the idea that higher breakevens for producers will keep supply in check. Going back to the relationship of producer returns and change in the breeding herd, one can see that negative returns sometimes result in a drop in the breeding herd from June to September. But positive returns do not always result in herd increases. Last year, returns for the Jun-Aug quarter were solid and yet the breeding herd declined. We suspect uncertainty about Prop 12, higher future grain prices and a slowdown in Chinese demand played a role. During 2012-13, another year with high future grain prices, herds declined even as returns for the quarter were good. The point here is that it is not a given that improving margins during the summer will result in breeding herd increases. The USDA forecast for a 1.5% increase in 2023 pork production may end up being right, but those productivity numbers better hold up.

Pork supplies in the freezer are still running as much as 20% above last year but slightly under the five-year average. The pace of inventory building in August was lower than normal, largely due to a slower build for hams as well as a larger than normal decline in some processing items. The total inventory of hams at the end of August was 163.5 million pounds, 11.9% lower than a year ago and 13% lower than the five-year average. In the last five years, ham inventories in August increased an average of 13% from the previous month. This year inventories increased by 8%. High ham prices have resulted in a slower than normal build, which increases upside price risk due to the limited number of production days between now and Thanksgiving as well as potentially higher holiday demand for hams as HPAI decimates turkey flocks.

The inventory of pork bellies at the end of August was 32.5 million pounds, 85% higher than a year ago as well as 9.5% higher than the five-year average. We thought the cold storage number was supportive for bellies given that the drawdown in stocks during August was 24% compared to an average of 17% over the last five years. Last year, the August belly inventory drawdown was 37%, which set the stage for a sudden price increase in late September and October. USDA also made significant downward revisions to pork trim inventories for July and the inventory of trim at the end of August was 39.9 million pounds, 15% lower than the previous month and now just 3% higher than the five-year average.